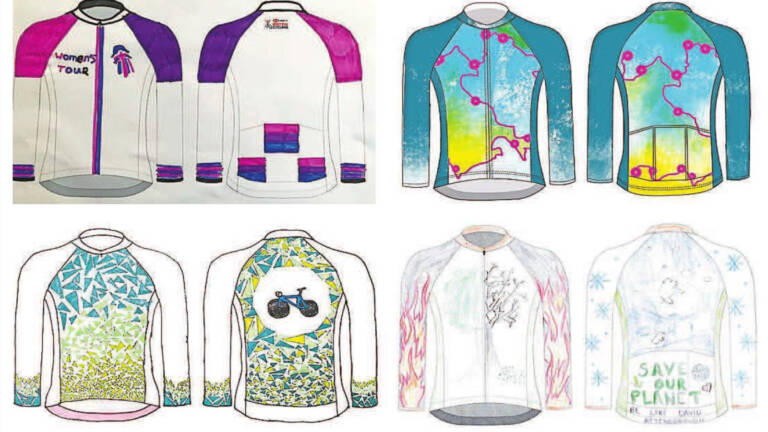 Four budding designers are celebrating after their creations were chosen as the winners of the Design a Jersey Competition in celebration of the AJ Bell Women’s Tour heading to the East of England next month.

Votes have been counted and the winning designs are in the process of being turned into cycling jerseys to be presented to the winners during stages five and six of the AJ Bell Women’s Tour, which is coming to Essex and Suffolk on Friday 8 and Saturday 9 October.

Entries for the Design a Jersey Competition were whittled down to three for each category by the judging panel, which comprised representatives of the East of England Co-op, which sponsored the competition, and Frinton­-based rider Clover Murray, whose CAMS-Basso Bikes team will be competing in the AJ Bell Women’s Tour.

The finalists were then put to the public vote on the East Anglian Daily Times website, with more than 1,600 votes cast.

“It felt amazing to win the competition,” said Elizabeth. “I am looking forward to seeing the best women cyclists on my home track in Colchester and I hope they enjoy it as much as I do. We may even get to see the new world champion!”

“I am thrilled to have won the stage five jersey competition,” said Jo-Anne. ”As a keen cyclist and graphic designer, it was great to combine both interests and I look forward to seeing the final jersey come to life.”

“I’m so happy to have won,” said Eloise. “I love cycling and racing my bike, and my dream is to take part in the Women’s Tour one day. I can’t wait to hopefully meet the riders on the day!”

“I’m delighted that my design has been chosen as it highlights a message I’m passionate about – saving the planet,” said Daisy. “I love cycling because it’s so healthy and environmentally friendly. I’m really proud that the winner of stage six will have the chance to wear my jersey and help share my message.

“I’m looking forward to seeing the Women’s Tour, especially as it comes through my own village!”

Competition notes
As well as presenting their designs to the stage winners in Colchester and Clacton on 8 October, and Haverhill and Felixstowe on 9 October, the winners will have VIP hospitality tickets for the day and receive a jersey featuring their design to keep.

“We were really impressed by the standard of all the entries so Elizabeth, Jo-Anne, Eloise and Daisy should be very proud to have been voted as the winners for stages five and six. We can’t wait for the Women’s Tour to head to our region next month and it will be great to see the designs turned into real jerseys and presented to the winners.”