Water – what are the facts? 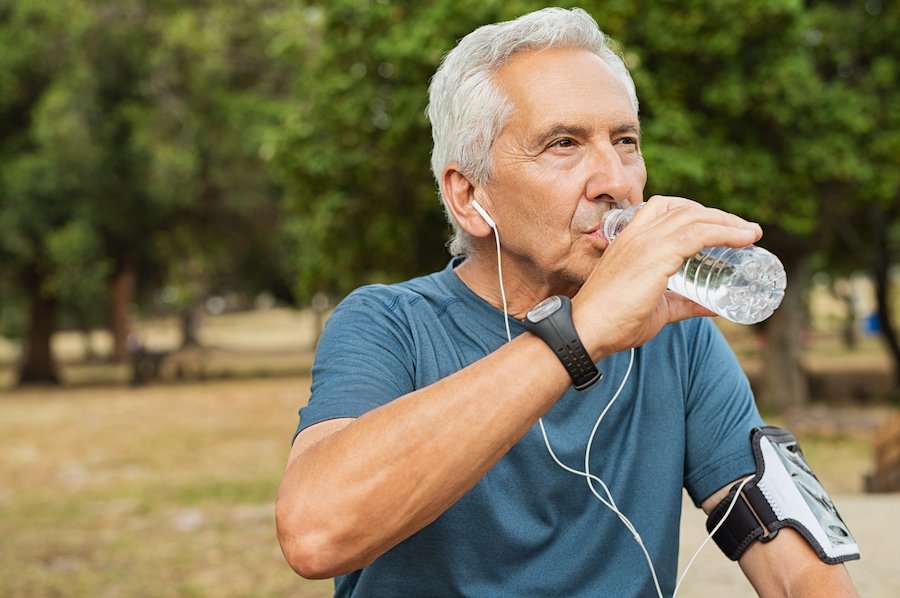 So we all should know by now that drinking enough water to maintain a healthy lifestyle is ESSENTIAL!

But do we actually know why…let’s look at the facts!

Our bodies are around 60% water, give or take.
– It is commonly recommended to drink eight 8-ounce glasses of water per day (the 8×8 rule).
– Although there is little science behind this specific rule, staying hydrated is important.

Water Helps maximize physical performance
– If we do not stay hydrated, physical performance can suffer.
– This is particularly important during intense exercise or high heat.
– Dehydration can have a noticeable effect if you lose as little as 2% of your body’s water content. However, it is not uncommon for athletes to lose up to 6-10% of their water weight via sweat.
– This can lead to altered body temperature control, reduced motivation, increased fatigue and make exercise feel much more difficult, both physically and mentally.
– Optimal hydration has been shown to prevent this from happening, and may even reduce the oxidative stress that occurs during high-intensity exercise. This is not surprising when you consider that muscle is about 80% water.
– So, if you exercise intensely and tend to sweat, then staying hydrated can help you perform at your absolute best.

Hydration has a major effect on energy levels and brain function
– Your brain is strongly influenced by hydration status.
– Studies show that even mild dehydration (1-3% of body weight) can impair many aspects of brain function.
– In a study of young women, fluid loss of 1.36% after exercise impaired both mood and concentration and increased the frequency of headaches.
– Another similar study, this time in young men, showed that fluid loss of 1.59% was detrimental to working memory and increased feelings of anxiety and fatigue.
– Many other studies, ranging from children to the elderly, have shown that mild dehydration can impair mood, memory and brain performance.

Drinking water may help prevent and treat headaches
– Dehydration can trigger headaches and migraines in some individuals.
– Several studies have shown that water can relieve headaches in those who are dehydrated. However, this appears to depend on the type of headache.
– One study of 18 people found that water had no effect on the frequency of headaches, but did reduce the intensity and duration somewhat.

Drinking more water may help relieve constipation
– Constipation is a common problem, characterized by infrequent bowel movements and difficulty passing stool.
– Increasing fluid intake is often recommended as a part of the treatment protocol, and there is some evidence to back this up.
– Low water consumption appears to be a risk factor for constipation in both young and elderly individuals.
– Carbonated water shows particularly promising results for constipation relief, although the reason is not entirely understood

5. Drinking water may help treat kidney stones
– Urinary stones are painful clumps of mineral crystal that form in the urinary system.
– The most common form is kidney stones, which form in the kidneys.
– There is limited evidence that water intake can help prevent recurrence in people who have previously gotten kidney stones.
– Higher fluid intake increases the volume of urine passing through the kidneys, which dilutes the concentration of minerals, so they are less likely to crystallize and form clumps.
– Water may also help prevent the initial formation of stones, but studies are required to confirm this.

Water Helps Prevent Hangovers
– Alcohol is a diuretic, so it makes you lose more water than you take in. This can lead to dehydration.
– Although dehydration is not the main cause of hangovers, it can cause symptoms like thirst, fatigue, headache and dry mouth.
A good way to reduce hangovers is to drink a glass of water between alcoholic drinks and to have at least one big glass of water before going to bed.

Drinking more water can HELP with weight loss
– Drinking plenty of water can help you lose weight.
– This is due to the fact that water can increase satiety and boost your metabolic rate.
– In two studies, drinking half a litre of water was shown to increase metabolism by 24-30% for up to 1.5 hours.
– This means that drinking 2 litres of water every day can increase your total energy expenditure by up to 96 calories per day.
– The timing is important too and drinking water half an hour before meals is the most effective. It can make you feel fuller so that you eat fewer calories
– In one study, dieters who drank half a litre of water before meals lost 44% more weight, over a period of 12 weeks.
– It is actually best to drink water cold because then the body will use additional energy (calories) to heat the water to body temperature.
– You may hear that water helps us burn fat – possibly because when we’re dehydrated we can burn less fat as our systems slow down, which is not quite the same thing. But if we’re getting enough, water doesn’t seem to offer any magical benefit.

Water is essential for healthy digestion
– When we eat lots of fibre (which we should be) we need enough water in the bowel to keep everything moving through. If we don’t get enough, constipation can be an uncomfortable result.

We don’t get all our water from drinking it
– Being permanently attached to a water bottle isn’t necessary. We get water from other fluids, too – juice, milk, soft drinks, even coffee and tea. While you might have heard these last two are dehydrating, that’s a bit misleading; yes, they can have a mild diuretic effect but they still contribute to your water intake. So do many foods – most fruits and vegetables contain lots of water, and even unexpected foods like bread can be high in water.

It is possible to drink too much water
– This can be extremely dangerous. Hyponatraemia is an electrolyte disturbance that can be caused by drinking excessive water, causing the body’s sodium levels to become dangerously low.
– A milder form, so-called “water intoxication” can also be an issue – it’s sometimes seen in athletes who drink too much, too quickly. Symptoms include nausea, vomiting and blurred vision. – If you’re drinking more than four litres a day and you’re not an athlete or in a very hot climate, you could be at risk of over-drinking.
– Do not let this deter you from drinking water, but listen to your body, and drink a sensible amount.