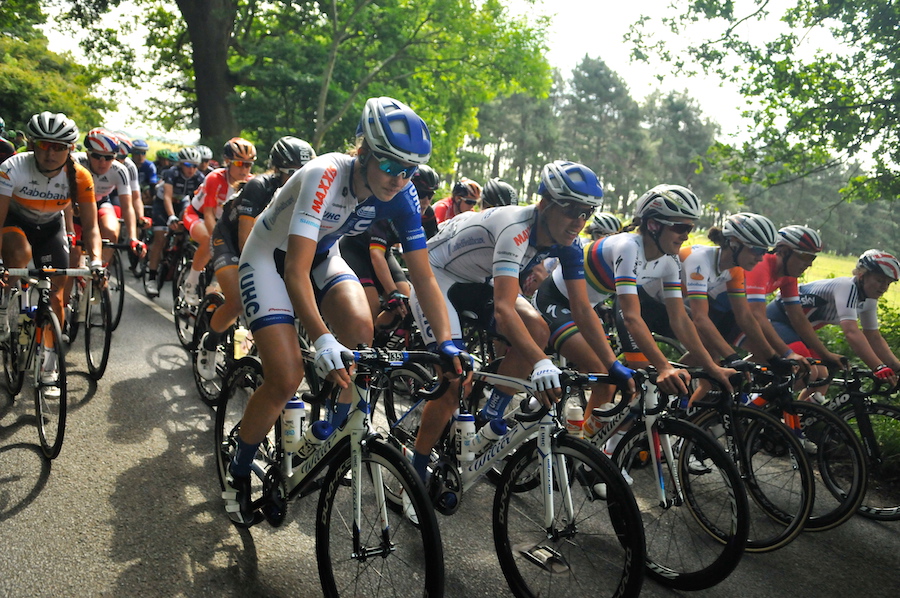 The world’s top cyclists will return to Suffolk this June as the county hosts the final stage of The Women’s Tour on Saturday 13 June.

It will be the first time that Suffolk has hosted the final stage of The Women’s Tour since 2014, with riders tackling a route from Haverhill to Felixstowe.

To mark the announcement, organisers joined Suffolk partners at the Port of Felixstowe, the UK’s biggest and busiest container port, and one of the largest in Europe, which will feature in the closing kilometres of the 2020 race. Clemence Cheng, Chief Executive, Hutchison Ports Port of Felixstowe said: “We are delighted to be working with the organisers to bring the 2020 Women’s Tour to the Port of Felixstowe. We are working hard to attract more women into our industry and we hope that hosting the country’s leading cycling event for women here will help more people to realise the opportunities that exist in our sector.”

The news comes as organisers SweetSpot announce the first details of the seventh edition of The Women’s Tour, which will take place from Monday 8 to Saturday 13 June 2020 and is the UK’s only round of the UCI Women’s WorldTour in 2020.

The event, which is currently without a title partner for the event following the conclusion of the three-year partnership with OVO Energy, was described in December by analysts Nielsen Sports as “the most globally recognised brand or event of the UCI Women’s WorldTour.”

Cllr James Reeder, Suffolk County Council Cabinet Member for Public Health and Prevention said: “The Women’s Tour has become a staple of our sporting calendar, here in Suffolk. This is the sixth time in the last seven years that we have hosted the race, and we are very excited that this year we will host the finishing stage of this prestigious international sporting event. It is particularly significant for me that the finish line will be in Felixstowe, as after serving as a Deck Officer on oil tankers, I worked here for a short time as a container ship loading master – albeit some 35 years ago!

“I have seen first-hand how The Women’s Tour and events like it inspire people to get involved in cycling events such as Women on Wheels and the wide array of activities the county has to offer.

“The Women’s Tour is always a much-celebrated event and I look forward to welcoming the tour back to Suffolk.”

Cllr Letitia Smith, East Suffolk Council’s Cabinet Member for Communities, Leisure and Tourism said: “We are delighted the Women’s Tour is returning to East Suffolk this year as we know our local communities, businesses and schools enjoy getting involved in this sporting spectacle. We are committed to increasing people’s participation in sport and the Women’s Tour will no doubt inspire more people to take up cycling and improve their health and wellbeing.”

Zhendong Zhang, Managing Director UK of Cosco Shipping Line said “Cosco Shipping is proud to be hosting Suffolk County Council, East Suffolk Council and Women’s Tour organisers SweetSpot on board our magnificent vessel Cosco Shipping Star to officially launch the Suffolk stage of the Women’s Tour 2020. As a local employer, it is fitting that we stand on the bridge of our world-class container vessel, to host the launch of a world-class event in support of the growth of women’s cycling in the UK.”

The six stages during that period (in 2014 two stages of the race visited Suffolk) have seen over 250,000 spectators cheer on the riders at the roadside in the county, with a net economic impact since 2014 of in excess of £5.3m for the Suffolk economy.

Commenting on the announcement, Women’s Tour Race Director Mick Bennett said, “Suffolk County Council and East Suffolk Council are the longest standing partners of The Women’s Tour and their support from the outset has contributed to the growth of the event into what it is today. Without the support of the likes of our partners in Suffolk we would not have The Women’s Tour today.

“We look forward to working with all our partners in Suffolk to make the final stage of this year’s Women’s Tour another incredible success and crowning the successor to Lizzie Deignan as champion in Felixstowe.”

More details of the 2020 Women’s Tour route will be announced in the coming weeks as well as further information about the route of the Suffolk stage of the race.

Find out more about the Women’s Tour