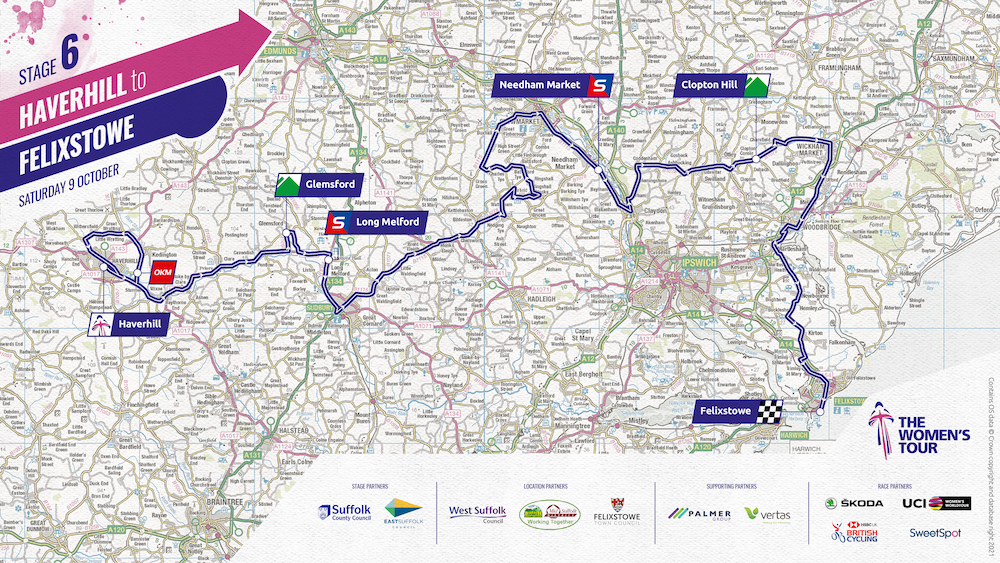 Stage six’s two sprints will be in Long Melford and Needham Market.

Both locations have hosted Sprint sections in previous editions of the race when it has visited Suffolk, with Long Melford having welcomed a Sprint in both the men’s Tour of Britain (2010) and the first edition of the Women’s Tour (2014), while Needham Market hosted a Sprint on the opening stage of the 2018 Women’s Tour.

Both Sprints will have bonus seconds up for grabs, meaning the Sprints at Long Melford and Needham Market could help decide the 2021 Women’s Tour champion.

The climb at Clopton Hill, the final climb of the race, comes after 113 kilometres of racing and is where the final points towards the SKODA Queen of the Mountains jersey will be awarded.

Cllr Andrew Reid, Suffolk County Council Cabinet Member for Public Health, Communities and Public Protection, said: “It’s exciting to have the Sprint and Queen of the Mountains Climb locations confirmed, which should make for a thrilling and challenging final stage of this year’s race here in Suffolk.

“It’s great that these competitive sections will be spread out across the county, giving spectators across Suffolk the opportunity to cheer on some of the World’s top female riders.”

Cllr Letitia Smith, East Suffolk Council’s Cabinet Member for Communities, Leisure and Tourism, said: “Excitement continues to grow for the return of the Tour this year and no doubt spectators will love seeing some of the world’s best cyclists fight it out in the sprints before racing to be crowned the 2021 Women’s Tour champion in the Final Stage in Felixstowe.”

Race Director Mick Bennett, said: “It is great to publish the details of the Sprints and ŠKODA Queen of the Mountains for the Suffolk stage to complete all of the key information about the route. We well know how important the bonus seconds at the Sprints can be so these two locations will be ones to watch if things are tight in the overall standings going into Stage Six.”

The world’s top cyclists will return to Suffolk in 2021 as the county hosts the final stage of the Women’s Tour between Haverhill and Felixstowe on Saturday 9 October. It will be the first time that Suffolk, which aims to be England’s most active county, has hosted the final stage of race since 2014.

This year’s Women’s Tour champion will be crowned in Suffolk following a day of racing between Haverhill and Felixstowe (155 kilometres). A characteristic scenic route through the county will take the peloton past the Melford Hall stately home and through Sudbury before passing along the runaway at Wattisham Flying Station. The route also includes Stowmarket, Wickham Market and Woodbridge, all of which have featured in historic Women’s Tour stages in the county, before heading south towards the finish line adjacent to the beach in Felixstowe.

READ MORE ABOUT STAGE 6 ON THE WOMEN'S TOUR WEBSITE

“I am delighted that we will be hosting the Women’s Tour when it sets off on its final stage from Haverhill on 9 October taking in some of the beautiful Suffolk countryside on its route to Felixstowe.

The Women’s Tour encourages participation in cycling and activity and showcases Suffolk to spectators and TV viewers worldwide. It is thought to have attracted some 300,000 spectators in its five previous visits to Suffolk, generating a net boost in excess of £5.3million for the county’s economy.

It is great to be cheering on the World’s top women cyclists as they compete in Suffolk once again.”

“It’s an honour to be supporting the Women’s Tour and helping raise the profile of women’s sports.

The race will roll past many of the schools we deliver services to, allowing us the opportunity to engage with and inspire hundreds of school children in the build-up to the event. We are proud to be part of this high-profile tour that brings together communities in celebration of an amazing sport and showcases our beautiful county to the world.”

“The Women’s Tour provides a fantastic opportunity for our communities to enjoy, and be inspired by, a world renowned sporting event as it passes through Babergh.

It is an honour for our district to have been selected to host both the Sprints and Queen of the Mountains, which are undoubtedly some of the most exciting and nail-biting sections of the race.

I hope that our residents will be out in full force to show their support for the riders and make it a truly memorable stage of this year’s tour.”

“Felixstowe Town Council is delighted to be supporting the Women’s Tour on its return to Suffolk this year and is proud to be hosting the finale of this fantastic race. With many activities planned that weekend, the riders can expect a festival atmosphere as they cross the finish line at Felixstowe seafront.”