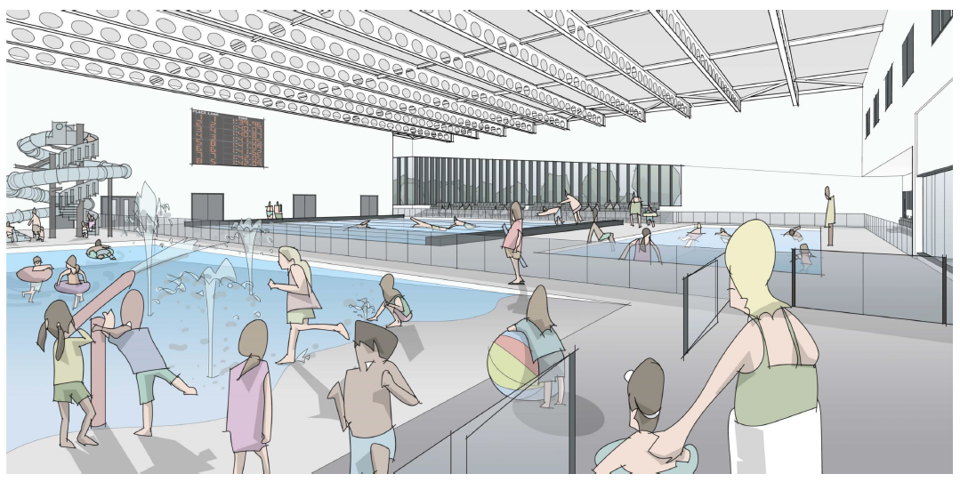 West Suffolk councillors will discuss the delivery of a £40 million replacement for Bury St Edmunds leisure centre as part of the first phase of the £75 million Western Way initiative.

Responding to what residents wanted to see, the new state-of-the-art centre will include a fun pool and soft-play alongside an eight-lane main pool, a large learner pool and sports hall, studios and a new gym. Renewable energy will also tackle the effects of the current energy crisis.
This phase is the initial step to deliver a masterplan to regenerate a key site in Bury St Edmunds while improving access to better and more modern services.

As part of the ongoing work to refine the design this phase has been reduced in scale and cost to get best value and affordability while delivering the planned much needed new facilities. This flexible approach protects the scheme during a national and international time of rising costs.
The Western Way project is part of a network of existing or planned community hub projects across the whole of West Suffolk aimed at securing the future of integrated local community facilities for health, leisure and skills.

In recent years, West Suffolk Council has invested over £5 million in improving leisure centres in Brandon, Haverhill and Newmarket and played a key role in the creation of the £40 million plus Mildenhall Hub.

The existing Bury St Edmunds leisure centre provides a valued service for the local community. However, it is nearly 50 years old and in need of immediate repairs, as well as not being large enough to cope with the growth in population to 2040. Like all leisure centres, it is also struggling with high energy costs. Keeping it going for another 20 years in its current form could cost over £13 million and a major refurbishment on the constrained site could cost over £25 million. And that would only delay a complete rebuild by about 20 years, costing an additional £60 million which would also mean the opportunity to build a new and larger centre as part of Western Way would be lost.

In contrast, providing a larger, modern leisure centre would cost £40 million. Spending a further £10 million on renewable energy for the site will get this new centre off the grid for much of the year and, with those savings, the Council will not need to increase what it has already put aside in its future budgets to tackle the condition of the leisure centre.

In addition, councillors will be asked to consider spending another £5 million on a break-even basis to turn the leisure centre into a community hub with additional community facilities such as a small and flexible health and wellbeing centre similar to those already installed successfully at the Mildenhall Hub, Brandon Leisure Centre and Haverhill Leisure Centre. Suffolk County Council is also considering being part of the phase one hub by investing in a new archive branch and a much-needed new pre-school.

The new Western Way initiative, by re-using the existing frame of the 1960s factory to save money and help the environment, has been designed to be flexible and has planning permission for further phases to include other public and commercial facilities. This hub approach has already proved successful in the nationally award winning Mildenhall Hub which has seen 70 per cent rises in use of the leisure centre, improved access to health programmes and better outcomes for all of the public services located there.

The project has always been designed to be delivered without adding to the existing burden on taxpayers, while providing modern facilities and better access to vital services. This continues to be one of the financial tests that the initiative must meet at every stage. And, when the cost of essential works and adding solar panels to the rest of the site are added to the smaller phase one scheme, the Council’s spending on the scheme in the coming years is now expected to be no more than £75 million compared to the £140 million first expected in 2019.

Continuing with the proposed plan allows for the current centre to remain operational until the new facilities open in 2025, ensuring that the community does not miss out on leisure services, particularly swimming programmes.

The proposed site ensures educational establishments, particularly West Suffolk College and primary schools, are able to maintain their use of the facilities for skills development. The centre will also remain in close proximity to the athletics track, a key competition venue for athletics in the Eastern region. The existing skate park is also a key part of the new scheme including a plan to extend it when new highway works are triggered.

The first phase of Western Way, which also comes with an agreed travel plan, will be discussed at West Suffolk Council Cabinet on 6 December before going to Council on 13 December.

“Delivering a new leisure centre in West Suffolk will significantly benefit the current and future community. Anyone who uses the current centre will know that it is very tired and in urgent need of an upgrade. Which is challenging in the current financial climate. By taking this new phased approach, and staying within our existing budgets, we can still provide the new, bigger and better facilities people have told us they want to see. And at the same time tackle health inequalities, improve the mental and physical wellbeing of local people, and encourage everyone to become more active. Which is what we have already seen in our other hub projects in other towns in West Suffolk.”