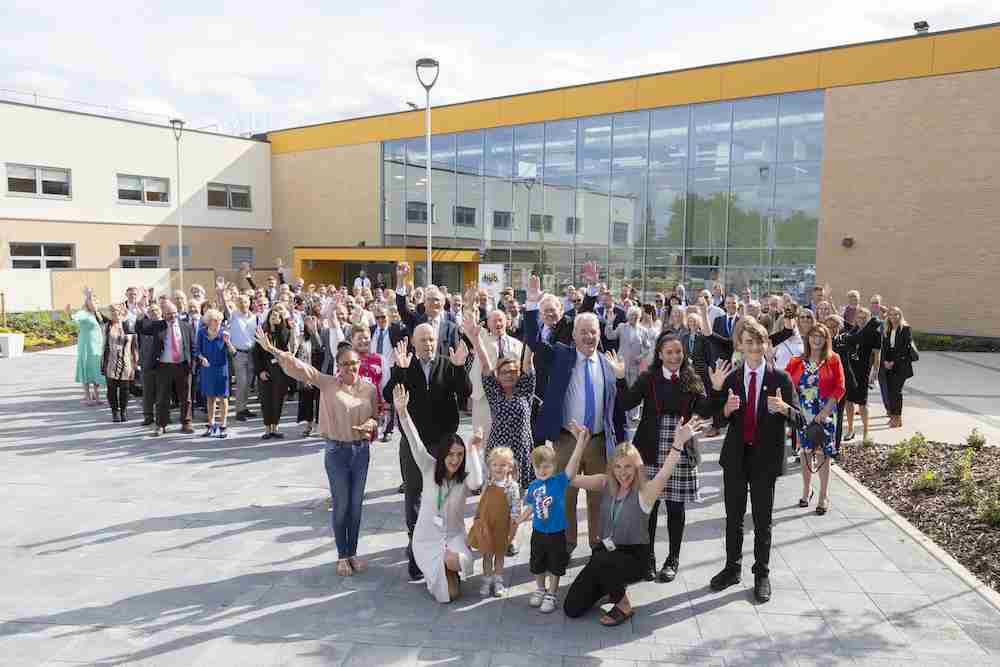 A community building which is helping improve education, health and participation, benefitting the lives of West Suffolk residents, has won a national award.

The Mildenhall Hub, which had its official opening in September 2021, has this week been named project of the year in the Government Property Awards beating a shortlist that included other major national projects. The Hub is an exemplar of the Government’s One Public Estate programme, demonstrating how the public estate can be a catalyst for place-shaping and better health, wellbeing and education.

In addition, the building, which is powered with an array of environmental features, has also been named best regional winner for best public or community building in the LABC (Local Authority Building Control) Building Excellence awards last month. It will now go through to the national finals in January.

And in its first year the Hub has seen success for the local residents it serves.

Mildenhall College Academy has seen exam results improve on pre-Covid levels, with principal Nicola Hood stating part of this was down to students and staff being ‘lifted’ by the investment in the building and resources available to them.

Abbeycroft Leisure has seen its membership double since opening at the Hub with over 1,650 members.
And its swim scheme has seen a huge increase growing to more than 880 people, an increase of nearly 80 per cent.

Behind the numbers, the Hub is making a difference to people’s lives, linking up services such as the NHS with leisure and library services to benefit patient care. A cardiac rehabilitation programme means patients benefit from using the onsite leisure facilities in a purpose designed programme. Additional clinic rooms have meant more health services for both adults and children are now provided more locally, saving journeys to hospitals.

And children attending the speech and language sessions also benefit by being able to go straight to the library to choose some books.

Suffolk Libraries meanwhile has seen huge success – the number of people signed up and regularly using their library card at Mildenhall, compared to before the pandemic, has increased by nearly 80 per cent and the amount of books and other media its loans out has also gone up by more than 50 per cent.
The £40m plus hub was funded by West Suffolk Council, Education and Skills Funding Agency, Academy Transformation Trust, Suffolk County Council, the National Lottery, through Sport England, and the Suffolk Police and Crime Commissioner, and is recognised as a significant project in the Government’s national One Public Estate Programme.

“It’s fantastic to get further national recognition for the innovative and ground-breaking collaborative work that West Suffolk, and its partners in education, health, leisure, community, and public services are achieving. The Mildenhall hub though is of course primarily for and about our local community, and the most important measure of its success remains the improvements to people’s lives that it is bringing. I am delighted to hear of its many achievements.”

“It’s great to hear that, just a little over a year after it opened, the hub, is achieving success in education and services in the NHS, leisure and the library all linking up together to benefit residents’ health and wellbeing. We are also seeing more people using the leisure facilities and library than before – and we are still only at the beginning of this story that will benefit our local community in and around Mildenhall for years to come.”

“The hub has provided the students and staff of Mildenhall college a state-of-the-art facility to match their vision and ambition. This has provided the platform for the academy to continue to grow and deliver outstanding educational outcomes.”

“A year on from its official opening, it is fantastic that the Mildenhall Hub has been recognised for the way it is supporting the local community. Being recognised for this national award, across all Government property projects, is testament to the partnership that had the vision and determination to collaborate in delivering this remarkable project.”

“It’s excellent news that Mildenhall Hub, which offers so much support to the community, is being recognised for the impactful work they do and their dedication to helping local people in West Suffolk be active. Their vision to co-locate so many complimentary services is to be commended and the benefits can be seen for local residents. Our 10-year strategy Uniting the Movement highlights the importance of connected communities for health and wellbeing. Local services like Mildenhall Hub are an important part of helping communities with their physical and mental health and it is vital we support them as we encourage more people to move.”

“This is excellent news. The Hub is a fantastic project designed to provide better facilities and accessible services for the benefit of local residents.  It’s great to see this successful multi-agency project recognised in this Government property award.

The Mildenhall Hub is powered using with an array of environmental features including solar panels, a ground source heat pump (GSHP) which is used to heat the pools, saving on greenhouse gases, and a combined heat and power (CHP) unit which combines a boiler and electricity generator into one. It generates electricity while heat created as a by-product is used for the hot water for the rest of the hub building as well as heating the pool air and toward heating the overall building.

The Mildenhall Hub also benefits from around 600 solar panels generating electricity during daylight hours, while a large 300kW battery called an E-STOR, made using 24 second-life Renault Kangoo electric vehicle batteries, stores any excess energy generated by the panels and CHP. It then switches to that onsite generated renewable energy at peak times, saving costs in the process.

The Hub was designed by Concertus Design and Property Consultants and built by RG Carter with project management from Currie and Brown.

It was named The Royal Institution of Chartered Surveyors (RICS) East of England Winner for best public sector project in its annual awards earlier this year. It will now compete in the national awards final this month. The Hub has also won best commercial building in the Royal Institute of British Architects (RIBA) Suffolk Craftsmanship Awards, also held earlier in the year.