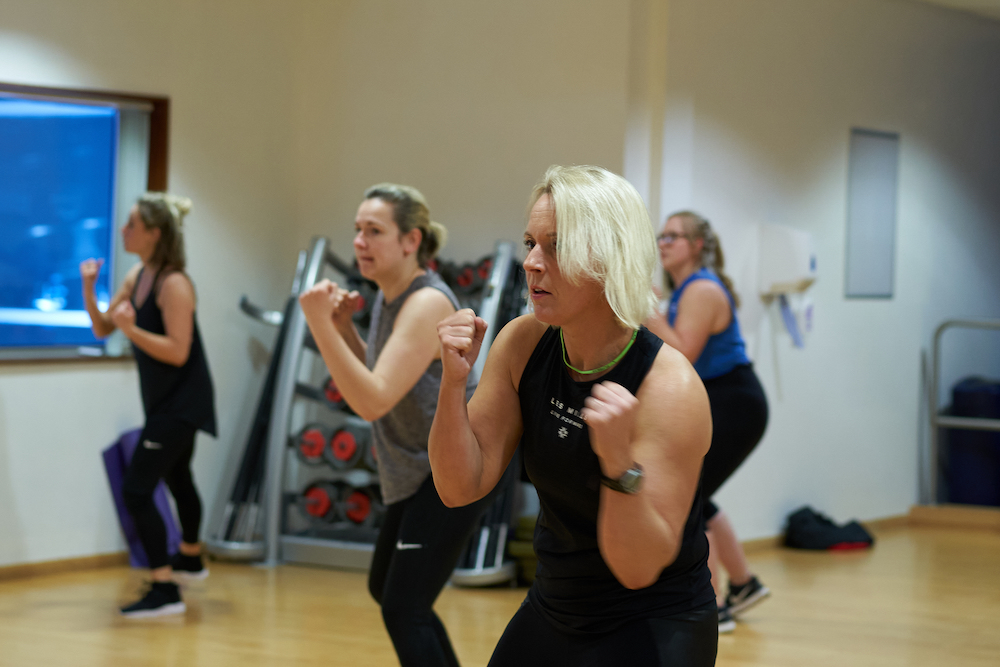 Deb is one of our ‘Inspire Me’ Ambassadors and we caught up with her in February 2020, to hear how exercise has been her saviour at times.

Deb has always been fairly active, riding racehorses most of her life, but she’d never been to a gym before, the thought terrified her actually.

About 10 years ago, a colleague of hers had been to a spin class at Abbeycroft’s Newmarket Leisure Centre, and Deb thought that sounded quite fun, so she tried it, liked it and started to realise how much else there was going on at the centre…so she joined.

Deb had been a member for about 3 years when she and her husband took a holiday in Derbyshire.

They had a great holiday, they’d played some sport together and her husband Matt hadn’t shown any symptoms of being unwell, but the day before they left, he started being sick and she knew there was something wrong because there was blood in the sink.

As they were driving back home from Derbyshire the following day, they had almost reached Newmarket when he had a massive oesophageal bleed in the car which was terrifying as there was blood everywhere.

Deb called an ambulance and luckily they weren’t too far from Addenbrookes Hospital, so Matt was taken there, but the doctors couldn’t work out what was wrong with him, so he was kept in overnight for observation. “The following day, one of the doctors called me to say that I needed to get there as quickly as possible as he was just about to go into theatre for surgery. When I arrived, it was very scary as there was blood coming out of everywhere and during surgery they couldn’t stop the bleeding.

He was given 24 units of blood followed by three days in intensive care and high dependency – before they received the devastating news that Matt had Primary Sclerosing Cholangitis (PSC), a chronic, or long-term disease that slowly damages the bile ducts. Matt’s only hope for survival was to have a liver transplant.

Matthews MELD score reached a level that qualified him to go on the transplant list.

So what followed for Deb and Matt was several years of hospital visits, adjusting to life with Matt’s condition, until five years ago when they were told he was being put on the list.

“Being on the list is so stressful because your life is controlled by the telephone.

We were called in once for a possible donor match, which then turned out to be unsuitable, so we agonised for an hour before we declined, and were put back on the list for a further 2.5 years. Eventually, we got the call again which turned out to be a successful match and Matt had his liver transplant in July 2017.

But before Matt had his transplant, our daughter Grace came along in 2012 which we were obviously thrilled about as we’ve always wanted to have children, but it was also extremely tough having this impending fear that Matt might die at any time.

After Grace was born, life became quite difficult for me in as much as I was Matt’s full-time carer, whilst working full time myself, because we had gone down to one wage and we weren’t eligible for any help at all, plus we were bringing up a little girl!

Matt used to look after Grace when she was little, whilst I went to work, and it was a constant worry for both of us that he would become ill and not be able to cope, but we had to make it work.

Even though time was so precious to me, I knew I had to stay healthy, not just for myself but for Grace and Matt too, as they both depended on me so much.

So despite my hectic schedule, I still made time to get to the gym to carry on doing my fitness classes.

They were a lifesaver for me!

When I was doing a class, it was an hour or so when I didn’t have to think about the situation at home. The other ladies in the class became like a second family to me, all so friendly and supportive, and they would give me a hug when I needed it.

Despite having had the liver transplant, Matt’s liver continues to give us concerns. There is always a risk that the PSC may return, and we’re obviously hoping and praying that it doesn’t as we’re not sure how we’ll stand for a second liver transplant. He has scans and tests every two weeks, and sometimes the results are quite positive but other times they are worrying.

“It’s an on-going nightmare to be honest, but all we can do is remain positive and hopeful and get on with life. We’re open and honest with Grace and she has been such an important part of motivating Matt to get up and get going so we’re all trying to live as normal a life as we can.

I’m working at Palace House now, riding ex-racehorses, doing tours and I also teach a couple of evenings at the British Racing School. Matt is managing to work at Rossdales Equine Hospital, as an equine radiographer.

Exercising with all my friends at Abbeycroft continues to keep me sane, it’s helped me stay energised when without it I would have been exhausted. It’s helped me cope with our situation, be a better Mum to Grace and a supportive wife to Matt.

Deb had to self isolate for 12 weeks in the first lockdown because of Matt’s condition.
So they walked every day for miles and miles in Newmarket with all the great open spaces.

“Then Matt and I decided to start to run after 4 weeks in isolation. We started running just 100m to start with and he would really be out of breath but then we started building it up. He’s done so well that we can now run around Nowton Park and he’s lost 1.5 stone!”

“With his condition, we never thought he could run because as a result of the operation, his airways were reduced and there was a default on his heart.”

“The look on his face when I told him he’d completed his first mile was amazing.”

Matt’s health is not too bad despite having a small ‘blip’ during the lockdown. He suffered from abdominal pains and colitis – but this may have been stress.

Grace is also now back at the gym and she loves it as much as Deb does.